There are many fairs throughout Buenos Aires each weekend. We have been to Recoleta, San Telmo, and Puerto Madero, but, by far, the best we have been to is La Feria de Mataderos—the Fair of the Slaughterhouses. This fair has Argentinos in mind—not tourists—and it is a fascinating and fun afternoon. 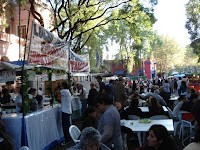 This fair is in the barrio of Mataderos, or Nuevo Chicago on the edge of Capital Federal. It is called that because it is the former area where all the cattle were brought to be slaughtered, just like Chicago in the USA.

This fair began in 1986 as a place where Argentinos could explore their cultural roots. Unlike the other city fairs that foc

us mostly on Porteño culture, like the tango, this fair focuses on the culture of all the provinces.

Over the past 20 years, it has become a place for all Argentinos to gather and share their common culture. There are three basic types of culture: traditional crafts and food, artistic crafts, and Gaucho skills.

Dance groups and music groups from across the country are scheduled as featured performers each weekend. Additionally, fairgoers can participate in traditional dance right in the street—many in traditional costume, many not. Everyone is welcome to join the dance.

The most fascinating event is the Carerra del Sortija—the Race of the Ring. A strip in the center of a city street is covered with an inch or so of sand. Upon this surface, men race their horses at full gallop toward a small ring suspended from a metal frame 100 meters away. They stand in the stirrups and attempt to spear a ring—no bigger that the diameter of an American quarter dollar coin—with a pointed stick not much bigger than a pencil.

s is Argentina, spectators can stand as close as the wish to the action. They can experience the thrill and power of a horse at full gallop less than a

meter away. When the gaucho spears the ring, the crowd cheers. He returns holding his trophy high as the boys and girls hold their hands high to see if he will give them this souvenir.

This was the first Sunday of the regular season for the Feria de Mataderos. It is a long bus ride—about an hour on the 92 colectivo from Recoleta—but well worth the effort.

Labels: argentinos, getting around, sightseeing

neat stuff. maybe you should start shooting some photos for the FNP, KK. you know, kick it back with 'ol Sam Yu and Skip Lawrence?

nice post Ken... I knew you'd beat me to it :) You even did it before I got round to sending you my pictures, but Tom also beat me to that too!