A View From the Street 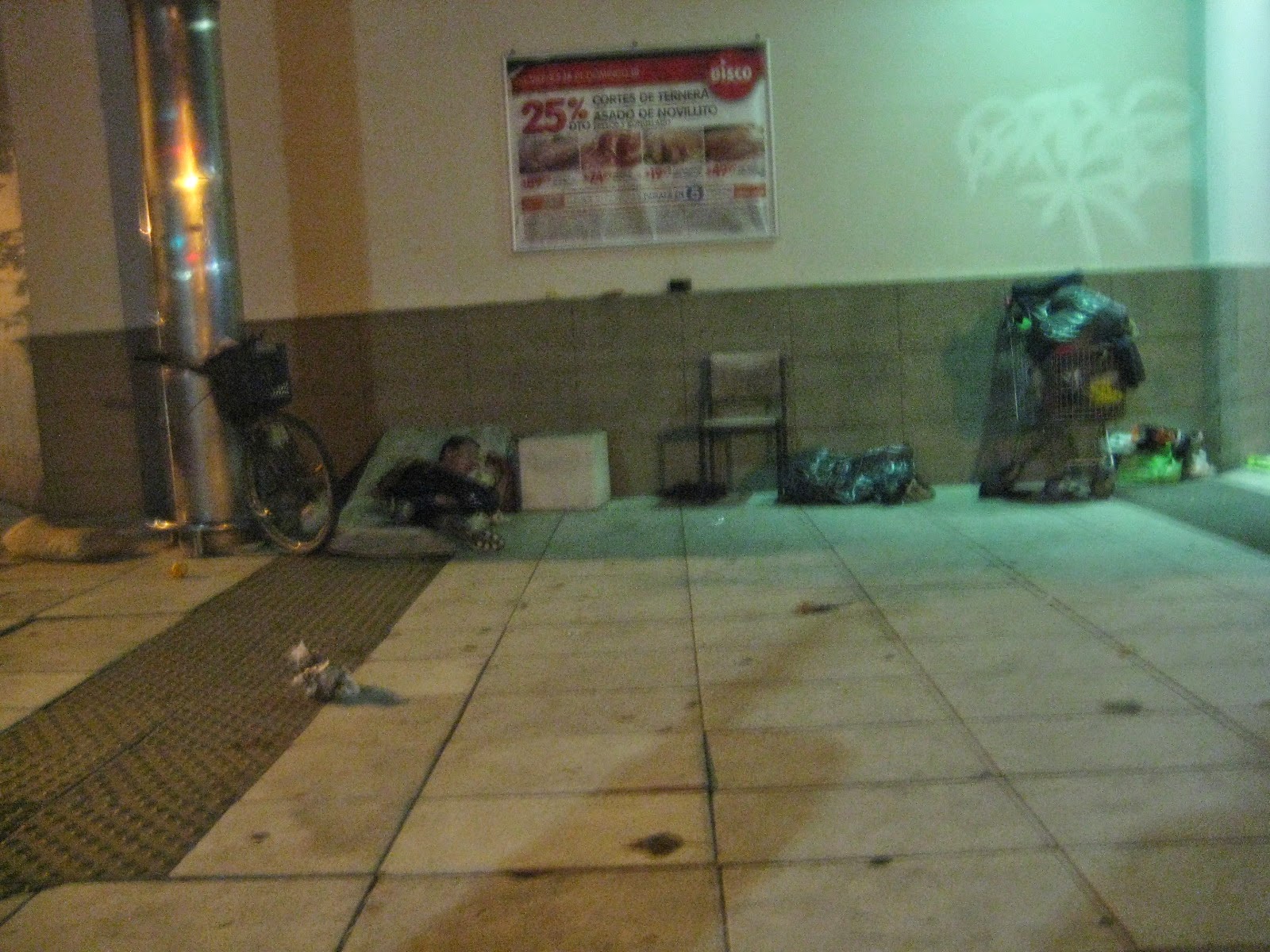 Our apartment is about one building from the corner of Armenia and Paraguay.  Catty corner is a Disco grocery store.  The Disco is ubiquitous in Buenos Aires, and while being the same, they are also as different as the neighborhoods they serve.

Our Disco is home to some people who live on the street.  And it’s like they live there.  The corner of the building is the bedroom and storage area (see above picture) and the side of the building is a living room, with a sofa, make shift chairs and regular visitors (see picture below). 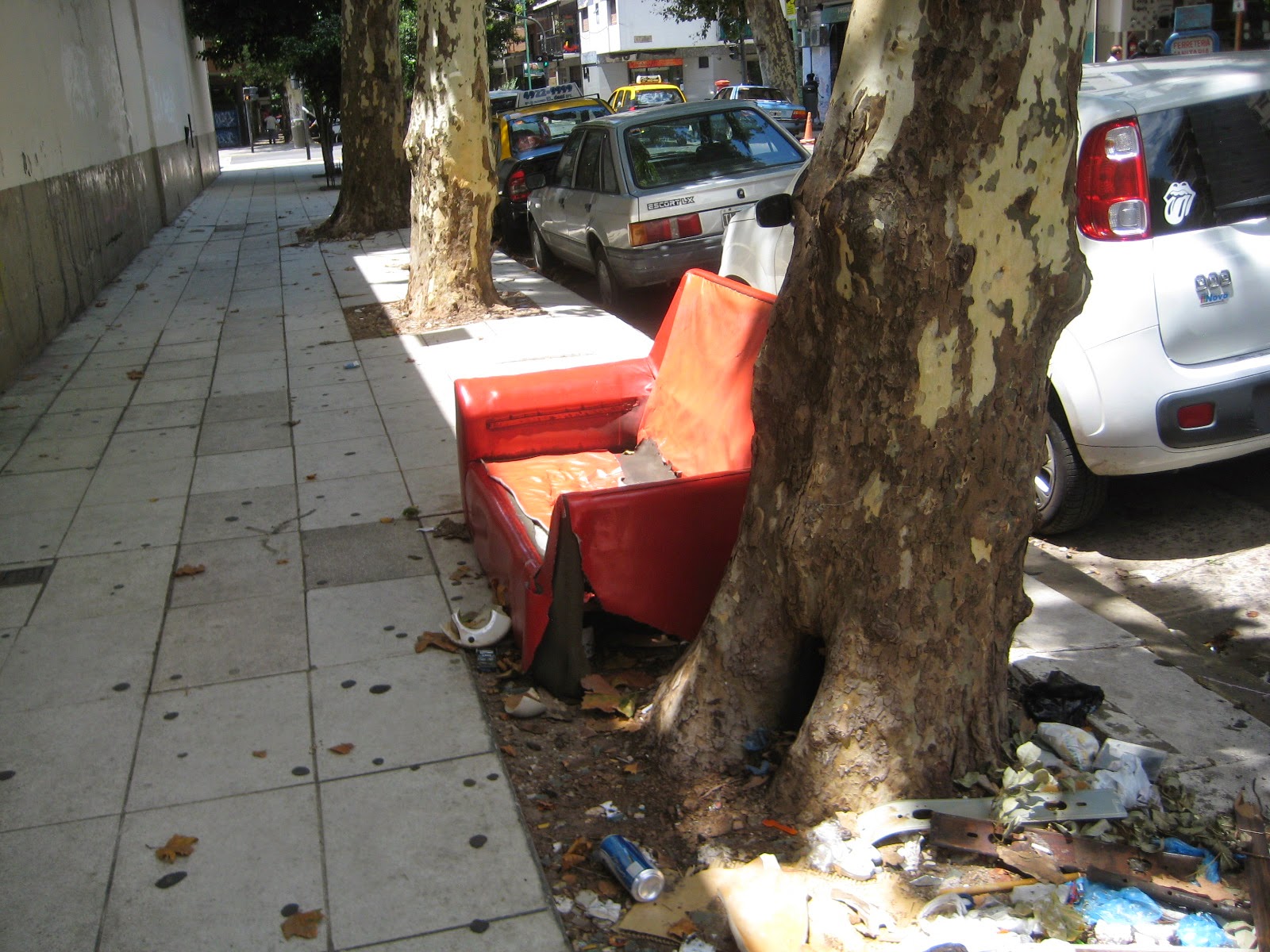 It is basically the same two men with occasional visitors.  For a few nights we had a blonde transvestite who caused a big scene while shopping in the Disco.  She is gone and another visitor has moved in.  I’m curious about the  politics on who gets the double mattress, because it seems as if the “homeowners” allow the visitors the best bed.  Unless of course,   the visitors pay for this privilege. The picture above of the "bedroom" has only a single mattress - I don't know why - the mattresses come and go. 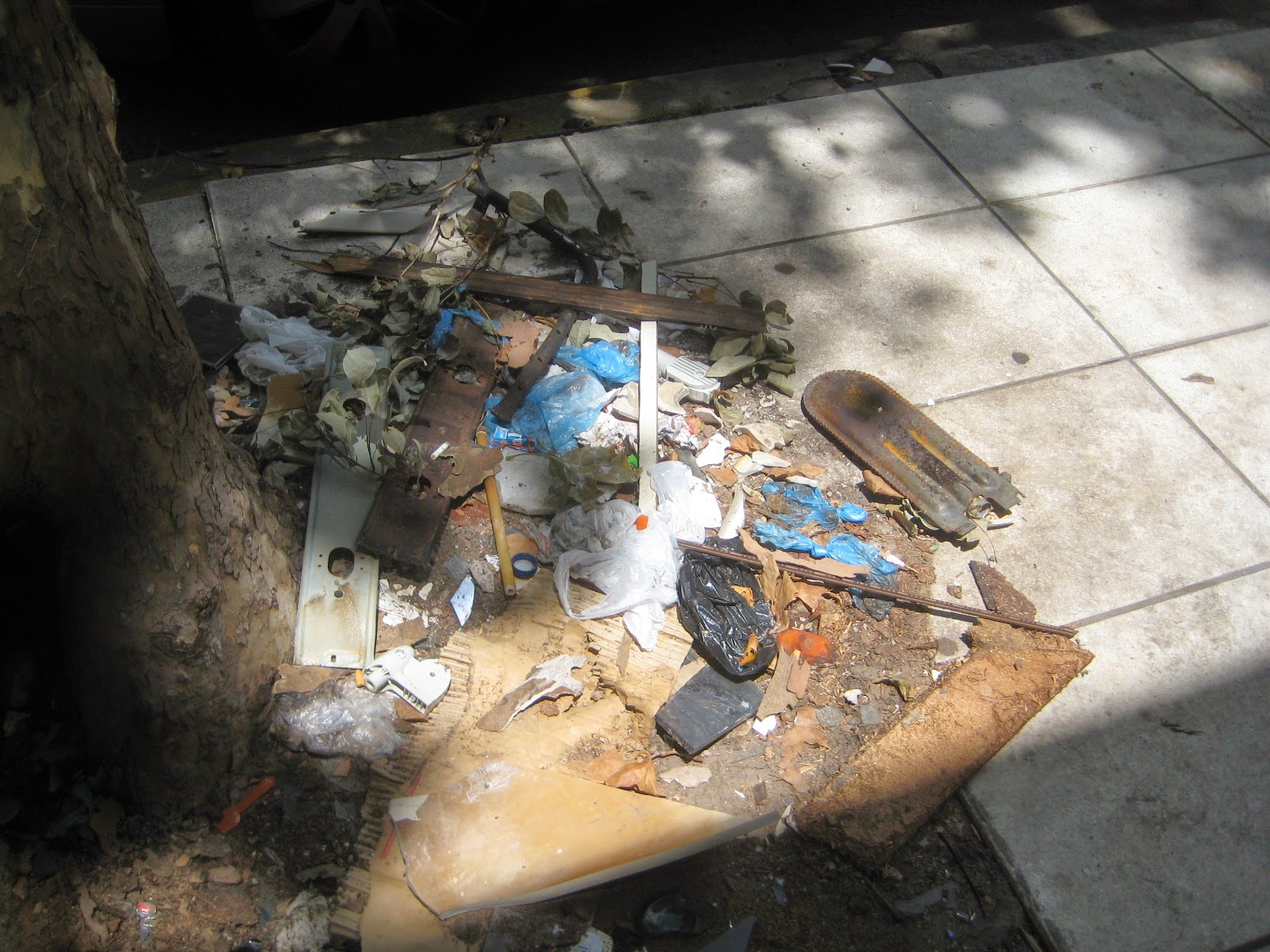 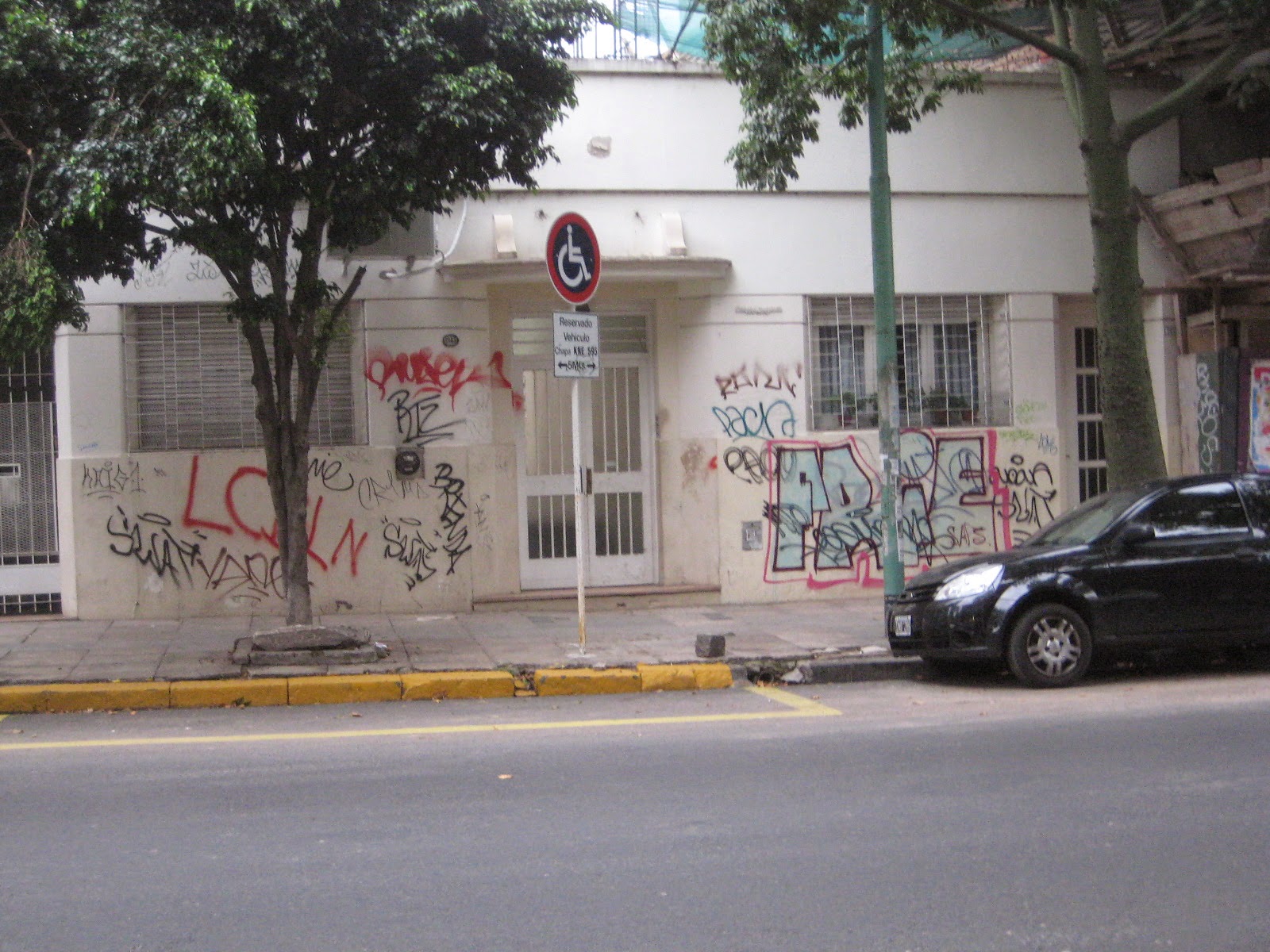 This picture depicts a part of our walk to school.  This graffiti is representative of most of our 1 kilometer walk.    Much of the architecture here is beautiful, but sadly it is almost entirely defaced.  I have this romantic notion that revolves around these street windows.  I picture in my head that in the past these windows were open to the street and people spoke through them to the neighbors walking by.  Today, all over the city, they barred and shuttered. 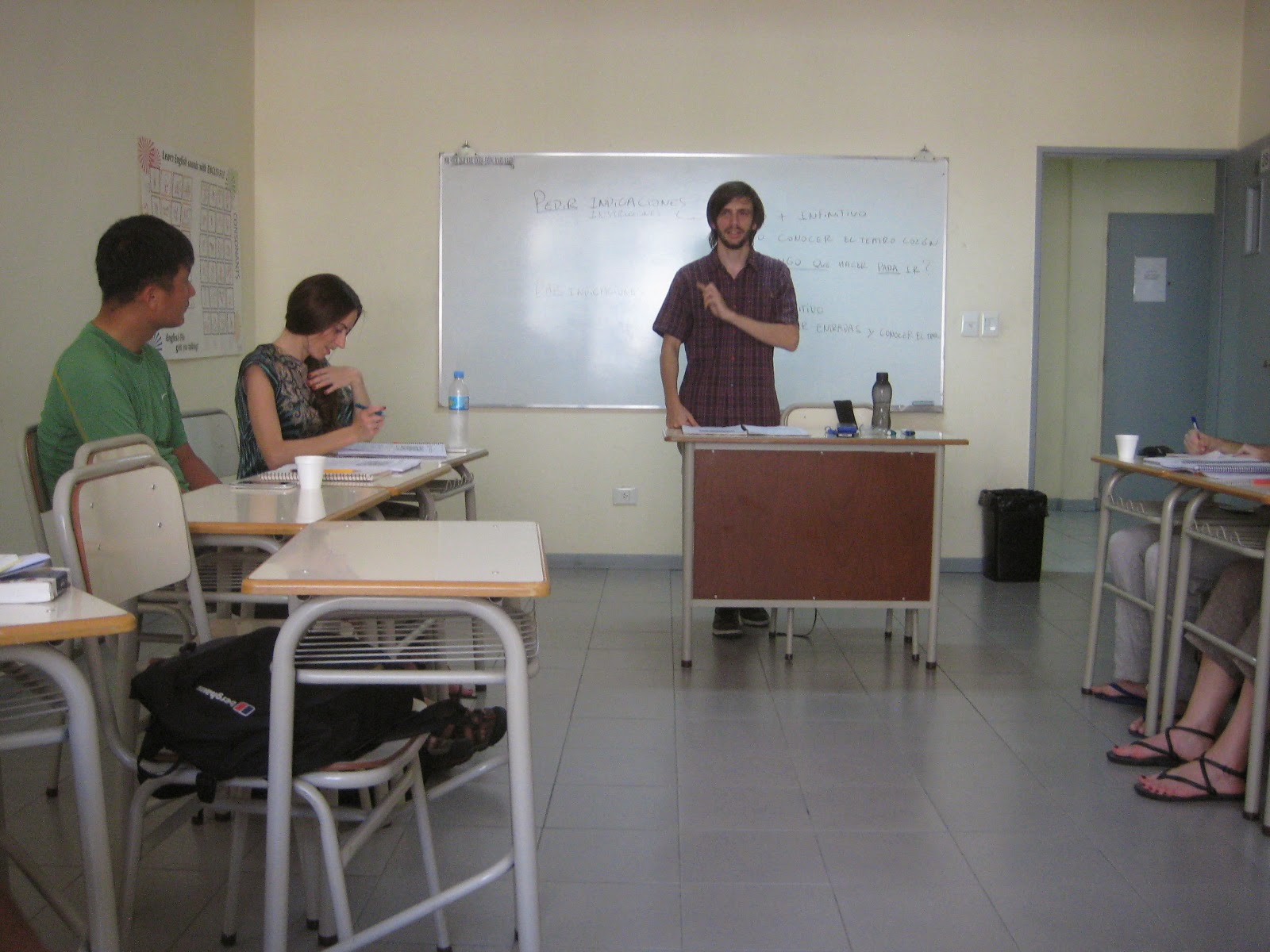 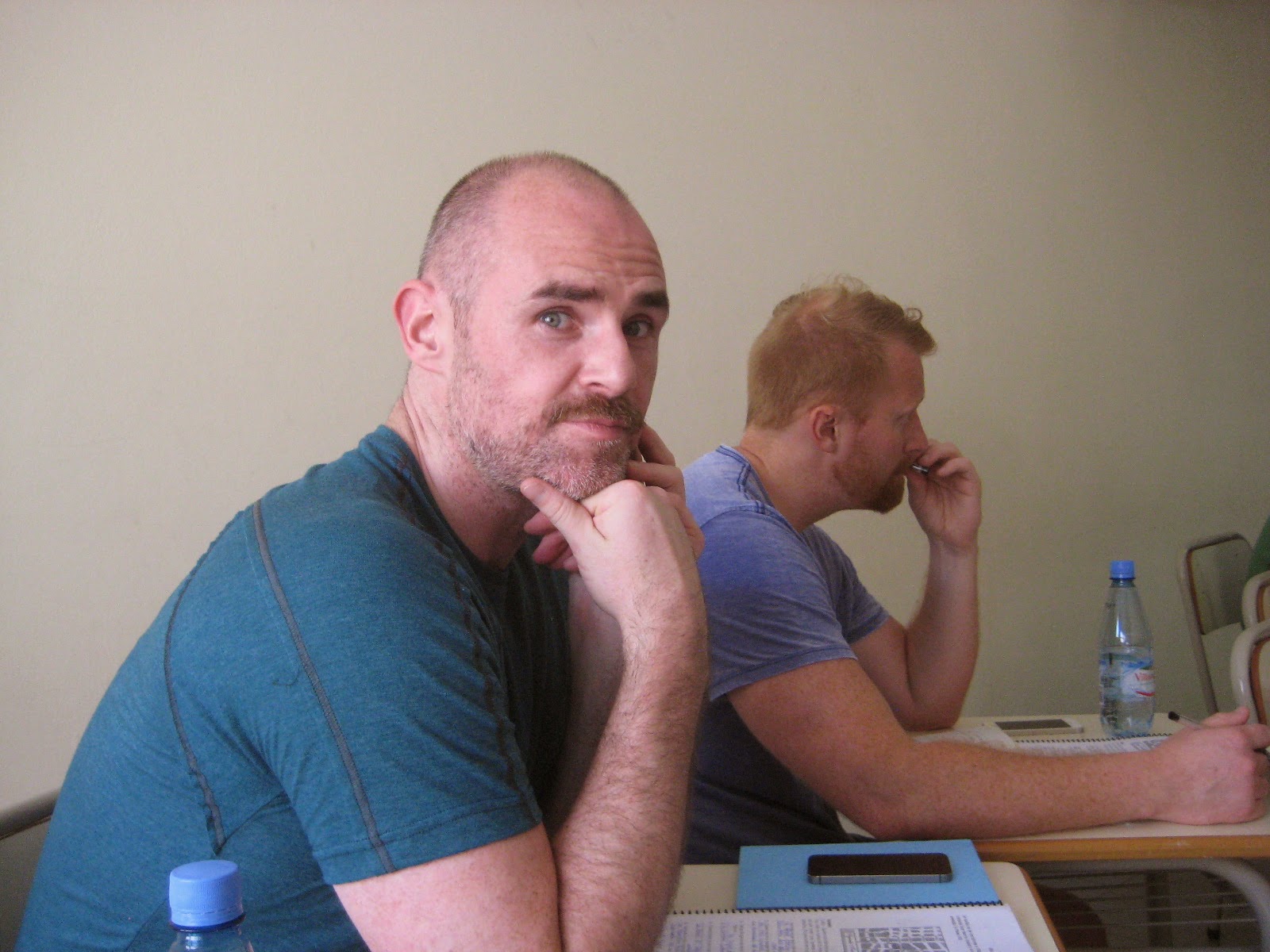 We were able to get the classes we wanted in the location near our apartment. It is summer here, so the schools are closed for break. There is an Armenian school where the Armenian kids learn a regular curriculum, but also learn about their culture and language. Apparently, there is a big enough Armenian community here to keep the school going. An interesting fact—all teachers in Argentina are paid by the state whether they teach in private or public schools. Another interesting fact about K-12 education here—teachers do not need a university degree. They go through a training program and take a certification test. 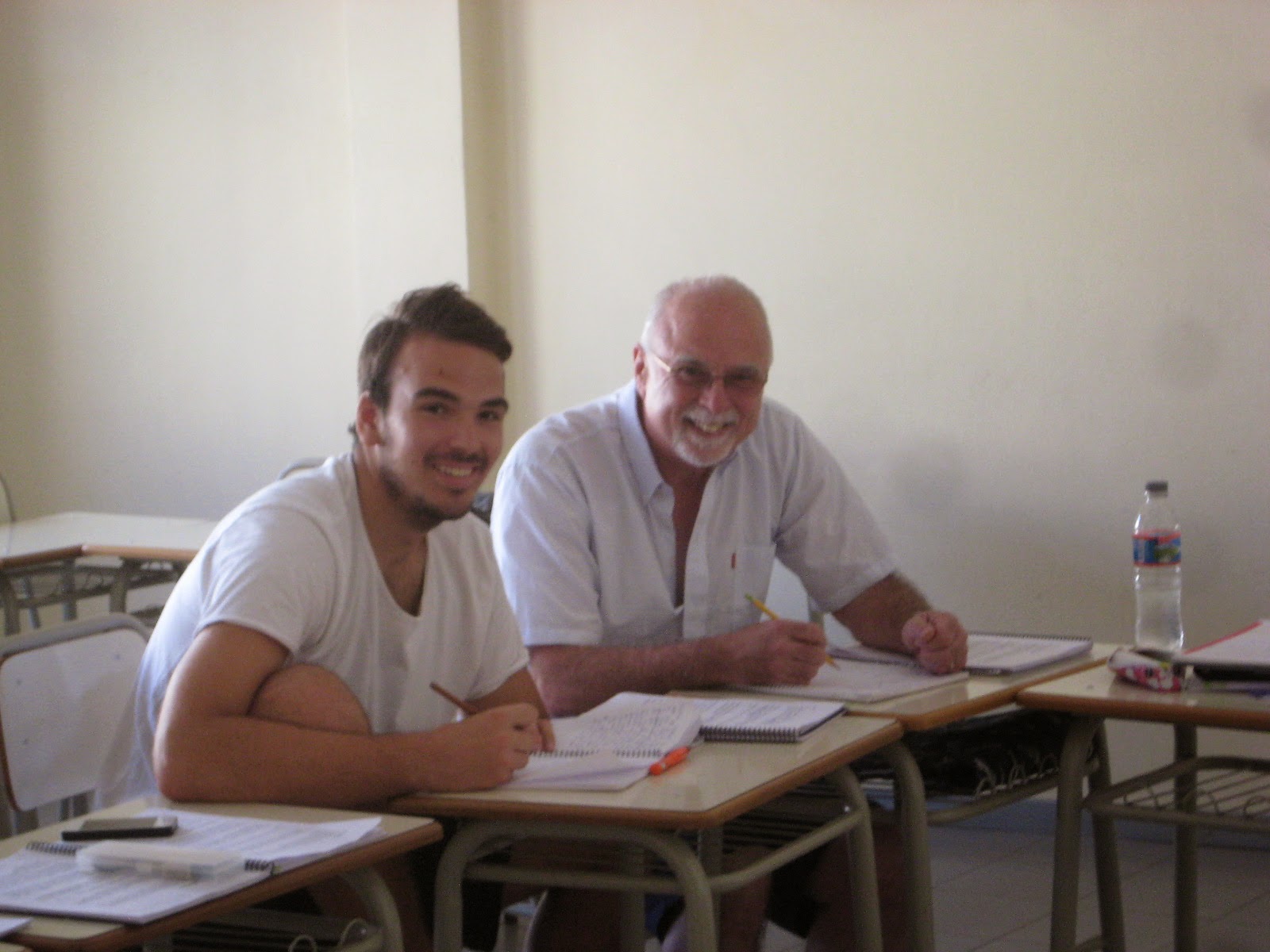 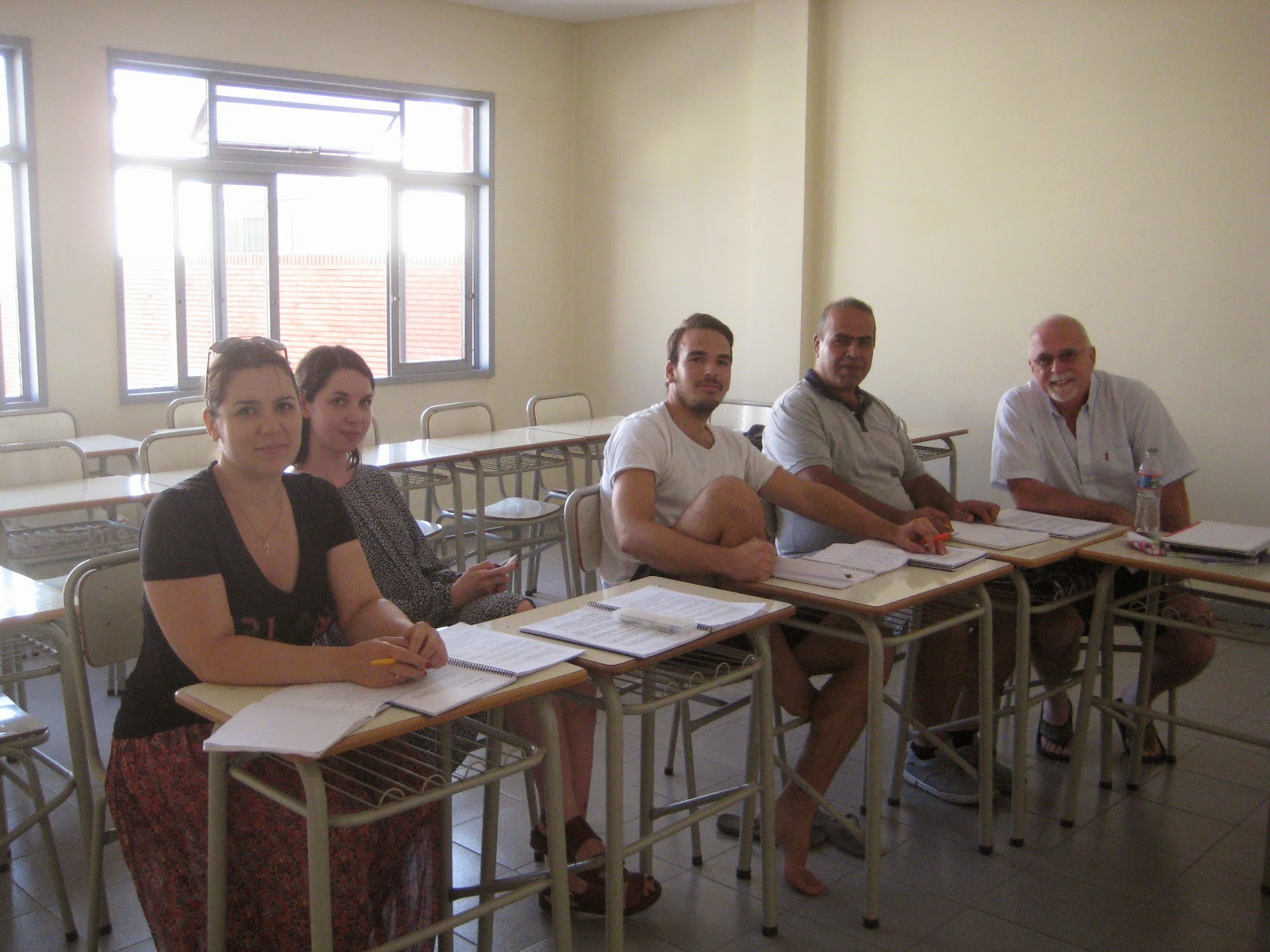 Anyway—back to our classes. Since the kids are on summer vacation, the University of Buenos Aires uses the Armenian school to teach language classes. I am in Nivel 2 and Helen is in Nivel 1b. Her class is huge with about 12 people. Mine is very small with only 5. We have two teachers for each class. One teaches 3 days per week, the other teaches two. 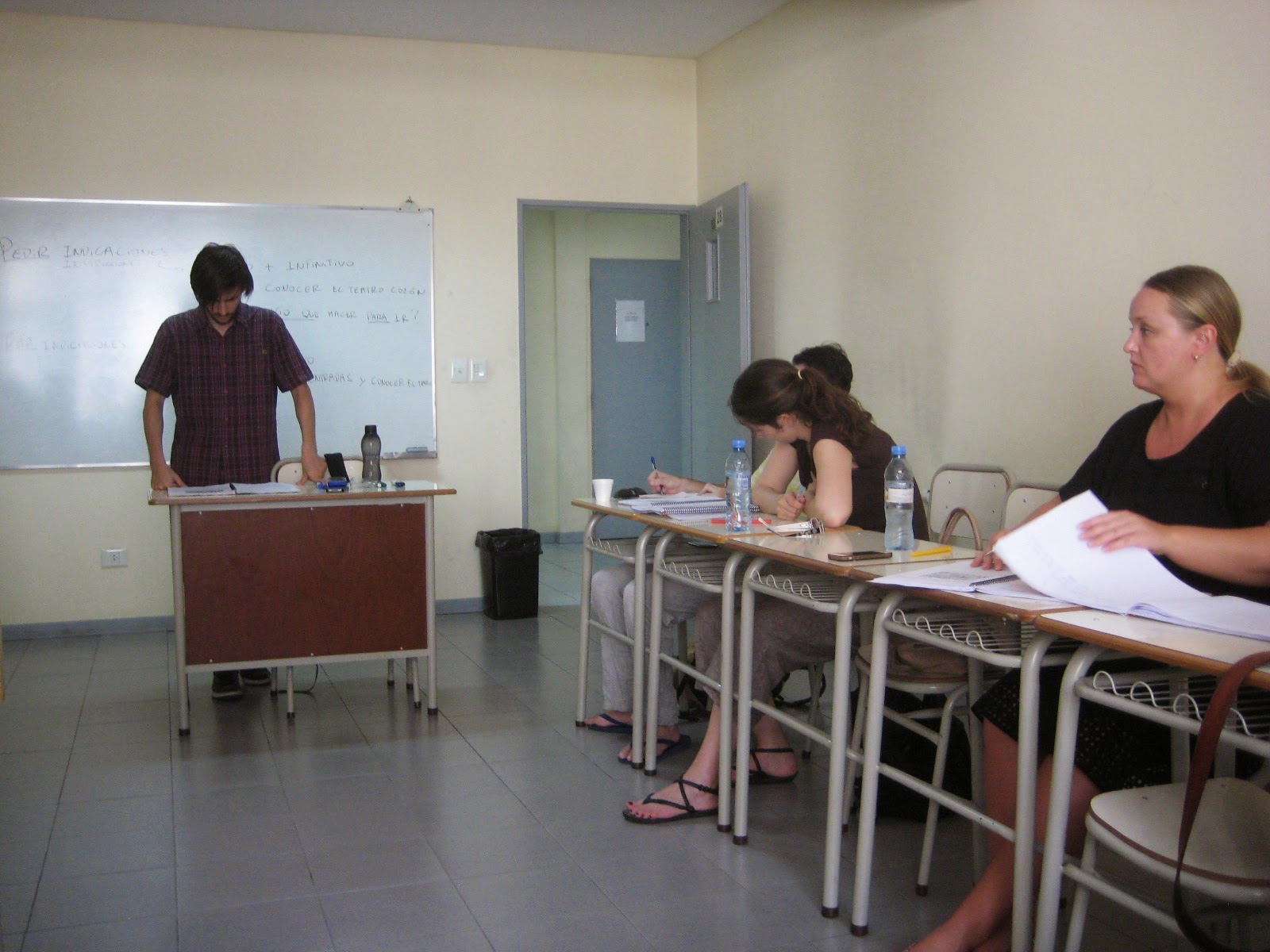 In my class, we have Nia from Russia, Gaia from Copenhagen, Villy from Stockholm, Sam from Damascus, Syria, and me.  In Helen’s class, she has two guys from Norway, a guy from Great Brittan, an Irish girl, a guy from Uzbekistan, a mom and daughter from California, a Chinese girl, and Israeli, two Russian women, a Turkish guy
Helen really likes one of her teachers, Rodrigo. One of my teachers, Andrea, was also my teacher when we were here taking classes in 2007 and remembered me. 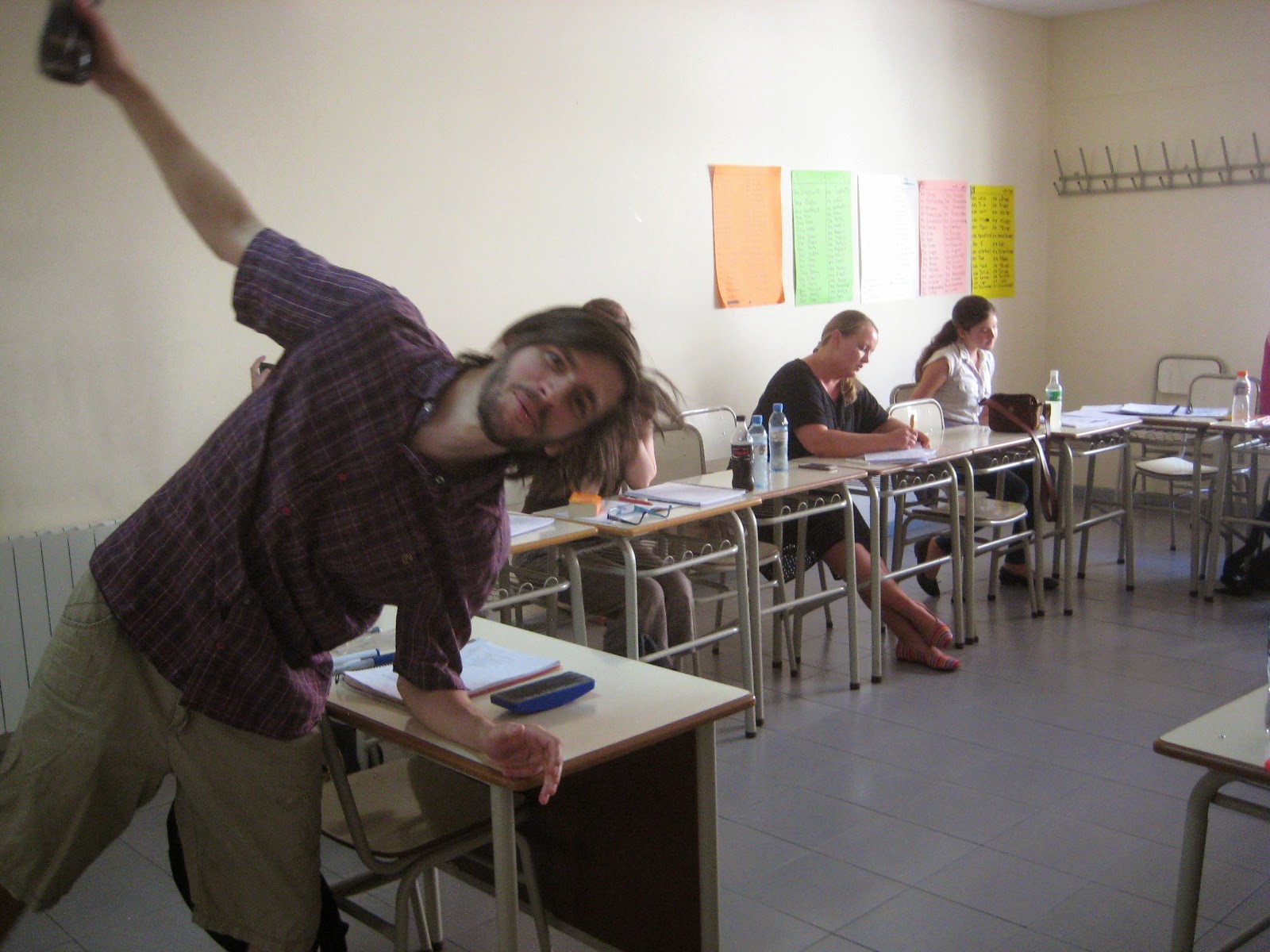 Where are all the street dogs?


Last time we were here there were street dogs everywhere.  It seemed there was a sickly dog that chose a restaurant seating area as its home at every restaurant.   There was dog poop everywhere.  Every park had multiple homeless dogs.  Dogs slept right in the middle of the busy street or in doorways.  I can’t find out what happened to them, but they are few and far between now.  I haven’t stepped in dog poop even one time.  We see a lot dogs walked on a leash, but almost no strays. 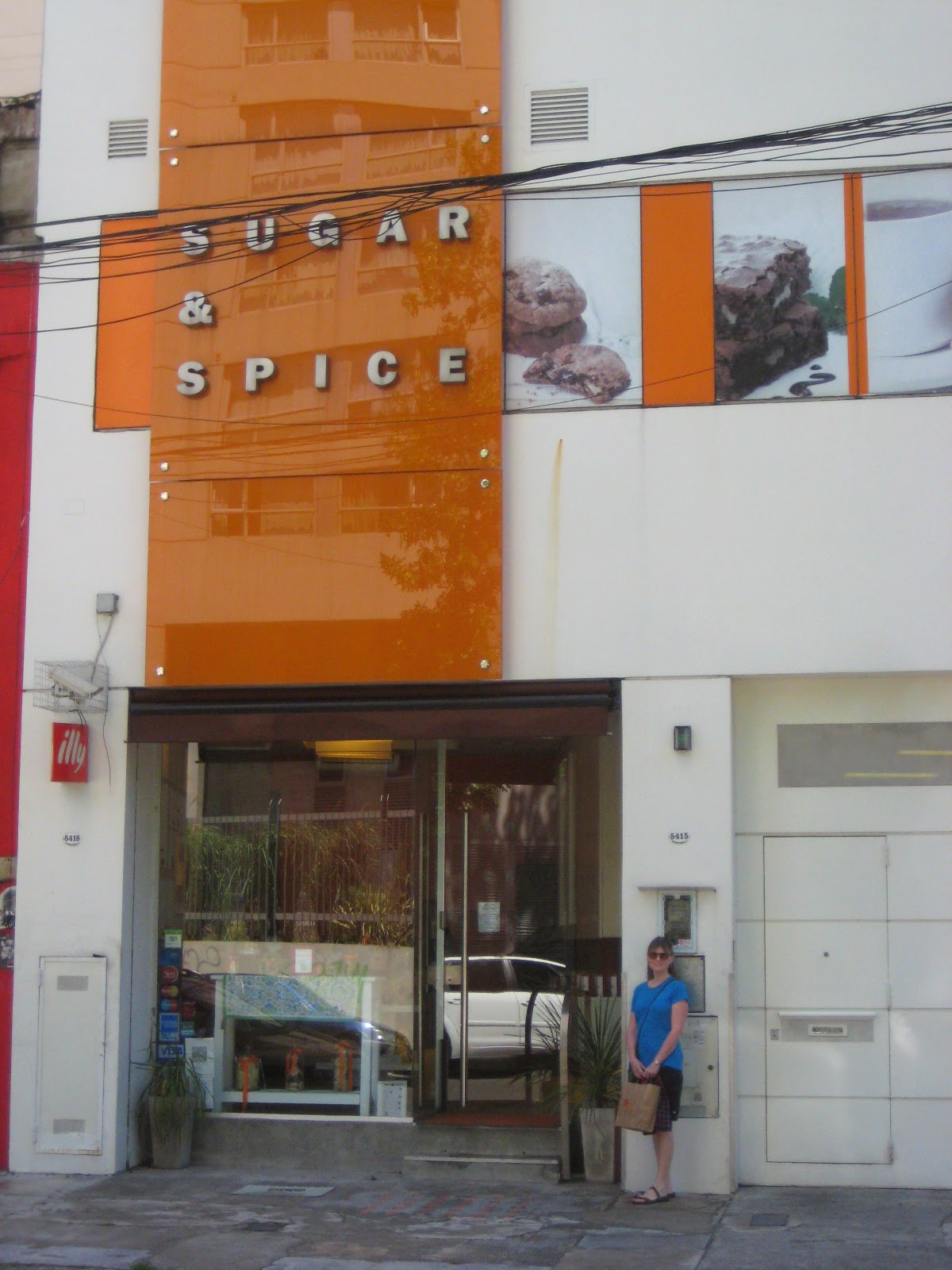 We met up for drinks the other night with Frank Alameda and his wife, Fabiana. We met Frank when we were here in 2007 and have stay Facebook friends over the intervening eight years. He is from Chicago and met his Argentine wife in college there. 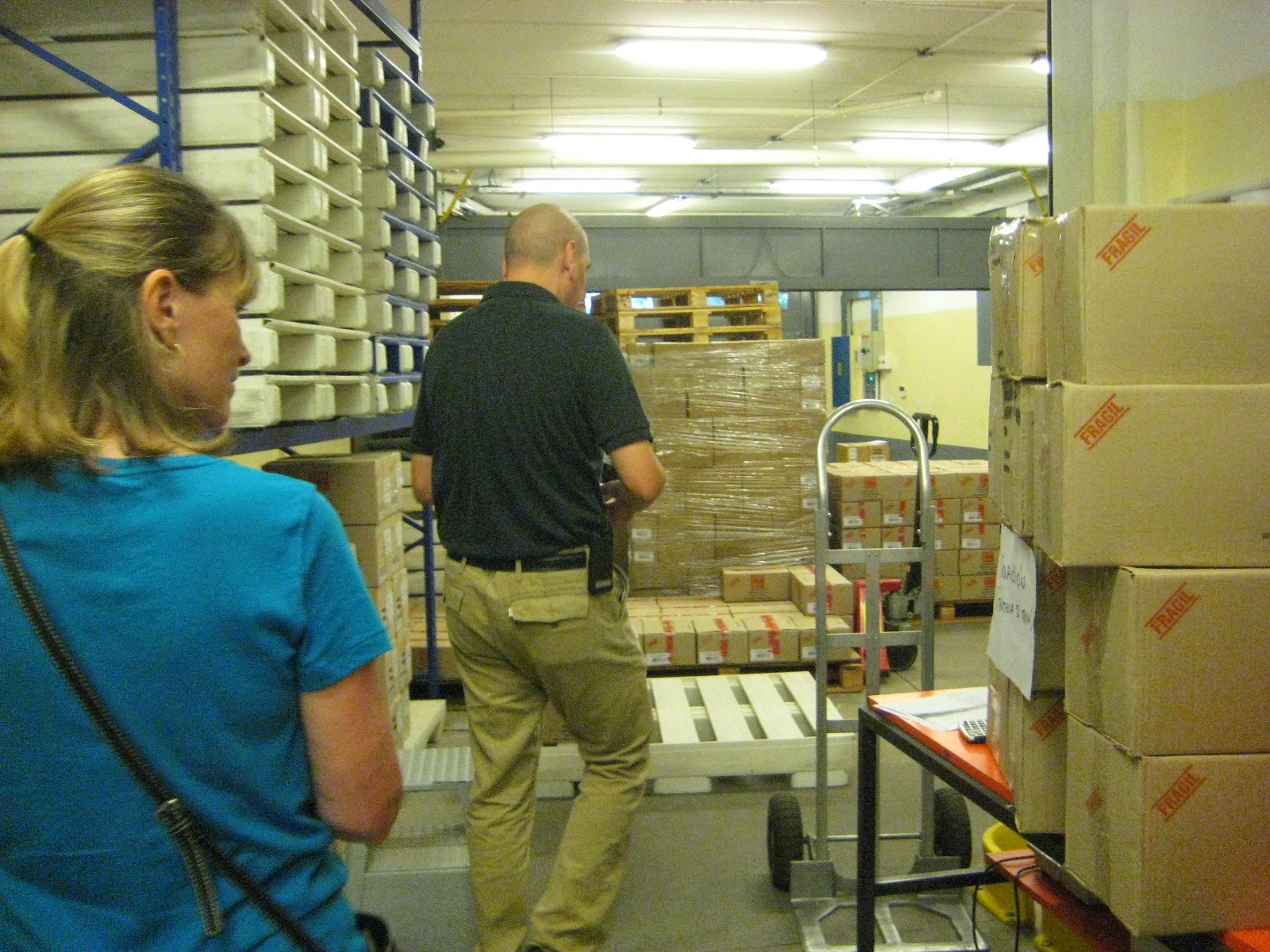 They moved here in 1999. Frank’s degree is in business administration. He noticed that there were no gourmet cookies here in Buenos Aires—only the argentine equivalent of Oreos and lady fingers. So he began to bake gourmet cookies out of his house and shop them around to cafes. He named his company Sugar and Spice.


After a few years, he became very successful and needed to expand. About that time, McDonalds approached him to see if he could provide cookies for their McCafes. He took the meeting reluctantly, knowing he did not have the production capacity to meet their demand. He told them of his plans to expand and build a factory if they could give him some time. Not only did they agree—they helped him redesign his architectural plans for a more efficient operation. 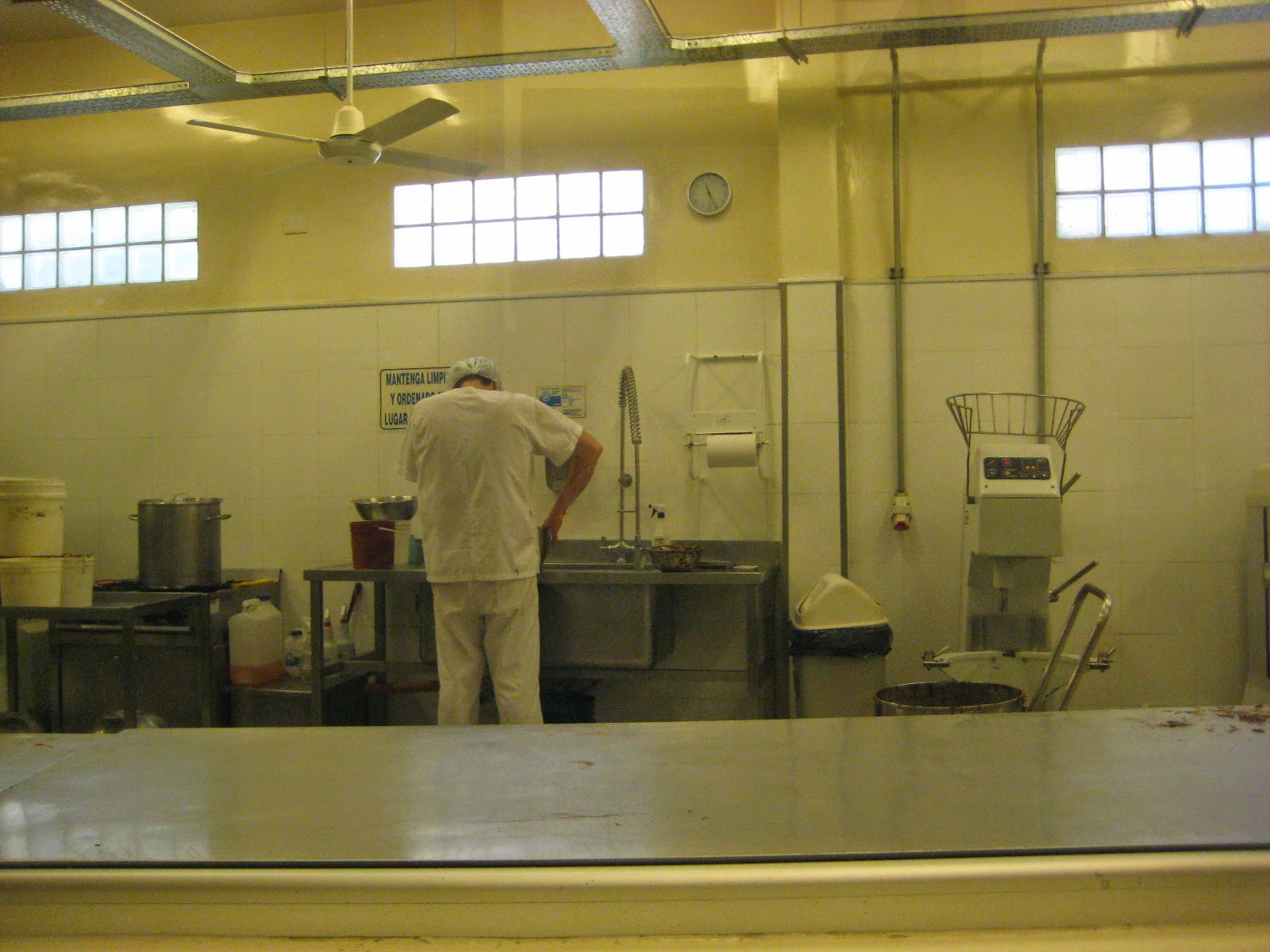 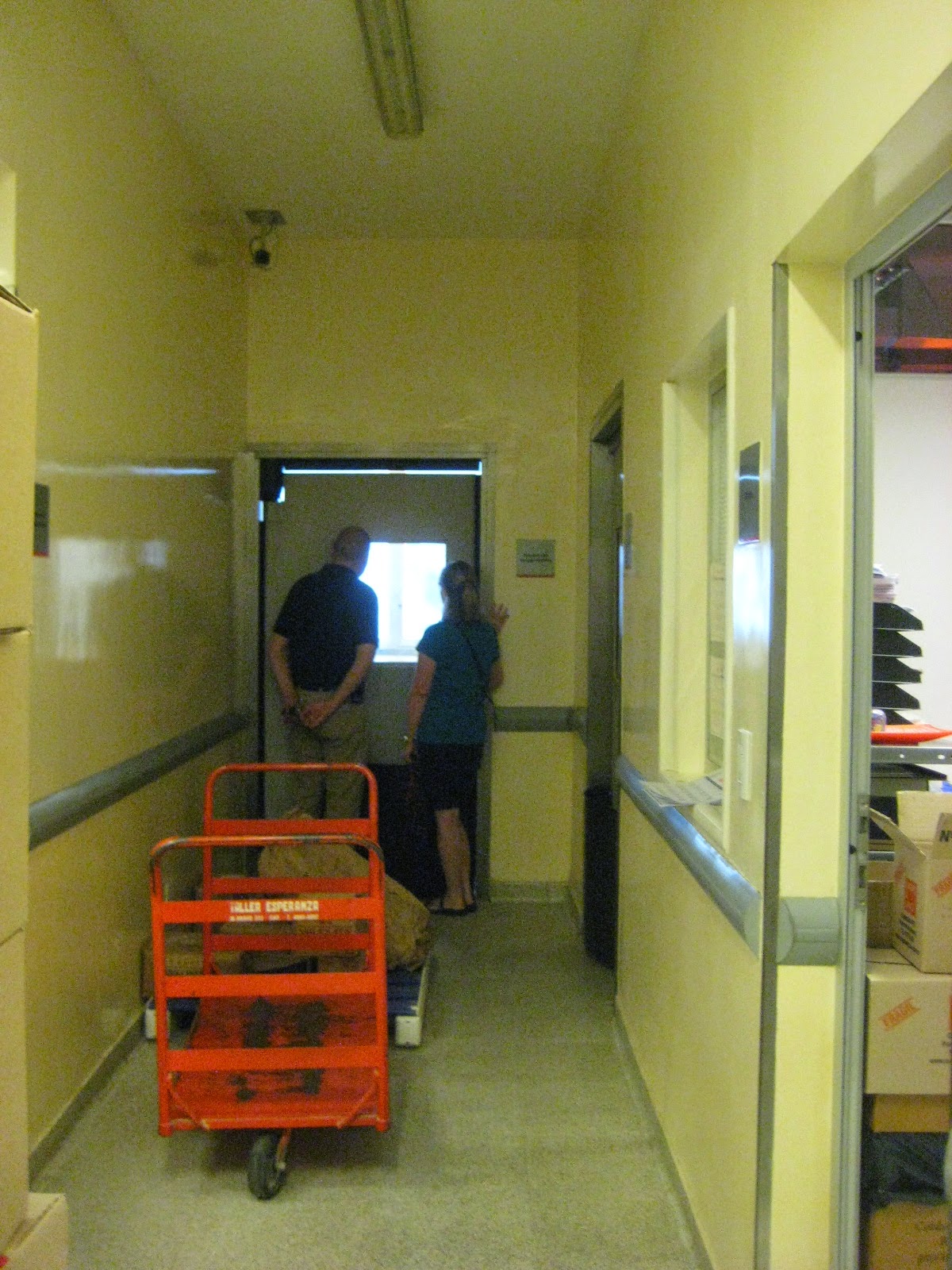 Frank and Fabiana bought a property in Palermo on Av. Guatemala—about 6 blocks from where we are staying. We went today to tour his facility.

Now in full operation, Sugar and Spice supplies cookies, pan dulce, muffins, and pound cakes to all of the McDonalds, Discos (supermarkets), Starbucks, and various mom-and-pop cafes throughout Buenos Aires. He explained his whole operation to us, and even gave us some lovely parting gifts of some boxes of cookies. Fabiana designed the packaging. Helen tried them and gave them her an enthusiastic get-these-away-from-me approval. 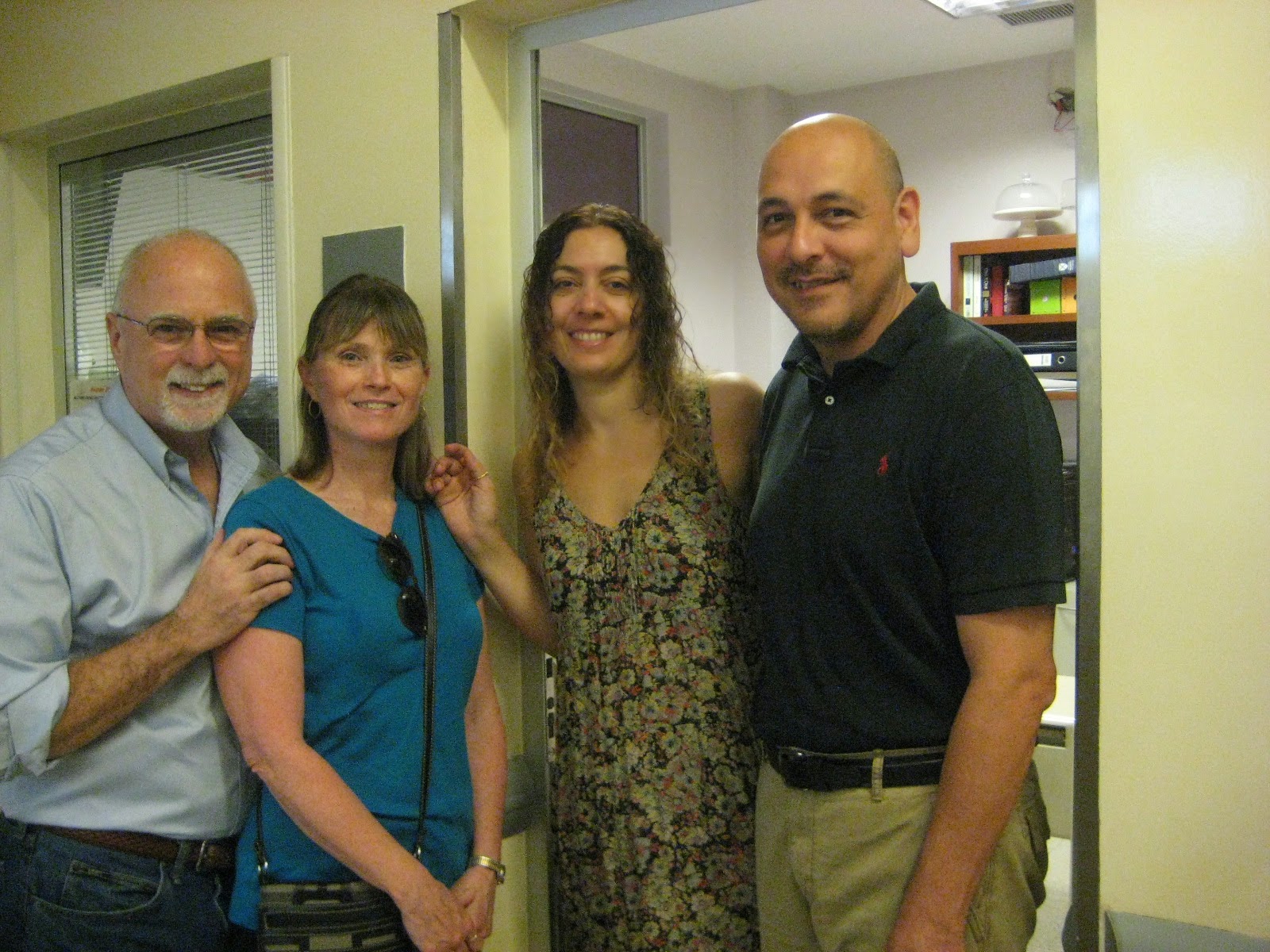 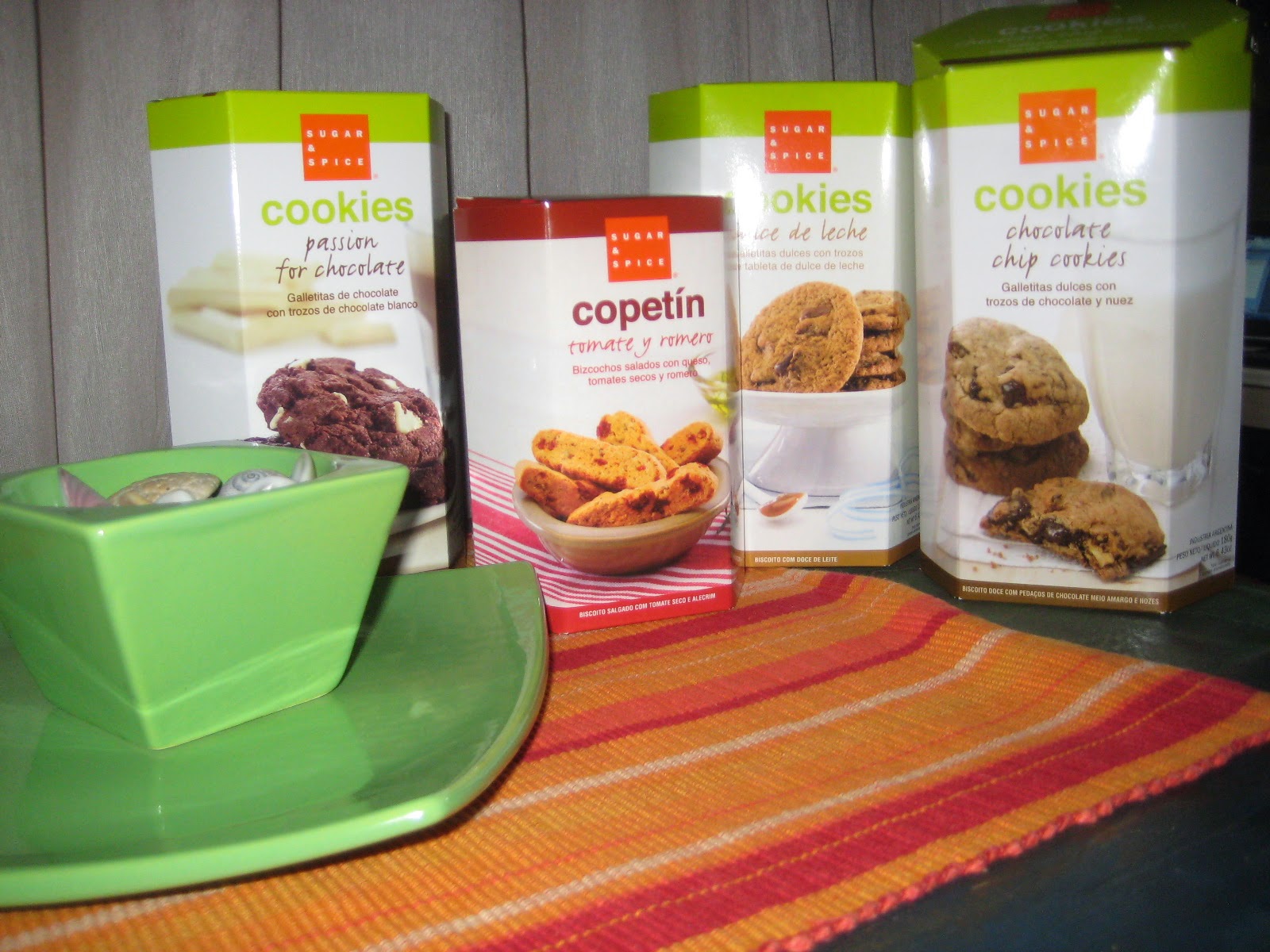 Unfortunately, we won’t see any more of Frank and Fabiana this trip, because they leave Monday for vacation in Italy and France. But what a cool thing to get to do—tour a cookie factory in South America!
Posted by Dr. K at Friday, January 09, 2015 No comments: