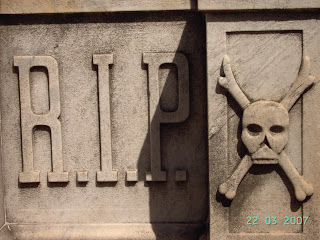 Yesterday, Helen and I went on a guided tour of the Recoleta Cemetery. We took the English tour with an international group of about 15. There were about 6 or 7 USAmericans, two Canadians, some French, Swiss, and an Argentina.

Our guide, Florencia, we charming and witty. She would often say, "Come close. There are gossips I must tell."

I have been to the cemetery at least a half-dozen times before, but just wandering around by myself. With Florencia, we were shown the historical, 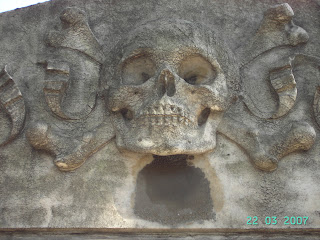 the interesting, and the downright strange.

"All the streets of Buenos Aires are buried here," she told us as she began to show us the tombs of Argentinas political and historical figures. There are many past presidents, military heroes, and a large mausoleum build for a Nobel Prize winner.

The cemetery is full. There are over 30,000 structures there. Rent is due each month, and cemetary property can be seized for tax auction after 40 years of non-payment. The catch is, there is no pre-paying. The rent must be paid every month. The currency here is so volatile that the cemetery board is afraid that next year's rent--paid in advance--will be nearly worthless when next year arrives. What makes it more difficult is that Argentinos do not u 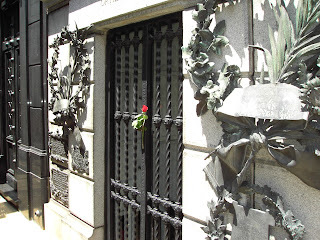 se checks to pay bills. Almost everyday, we see lines outside of bank with people cued up to pay their bills in cash. All-too-often, the person in front of us in the supermarket line, who looks like he has but a few items, will reveal a stack of bills he wants to pay. Each of these must be paid individually. Anyway, back to the cemetery . . .

Florencia also told us that whenever there is a financial crisis, old, establish, aristocratic Argentine families will sell their cemetary property. These properties sell for almost the price of an apartment to well over a million dollars--not pesos--dollars. While we were there she pointed out some sarcophagi that were for sale and one that had recently sold. that one was open and being repaired. We peered inside and were surprised to discover how deep the tomb goes--at least 10 meters. 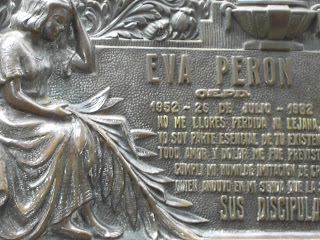 Of course, Evita is there. Now anyway. Florencia joked that Argentinos travel more in death than they do in life. Several times, she told us of political grave robbers who would hold remains ransom for political gain or political statement. Eva Peron's died in 1952 and she was embalmed--something that Argentinos do not regularly do. She was not buried, however. Her embalmed body was found by the military dictatorship that overthrew her husband, Juan. Fearing that she would be made a de-facto saint by her throngs of impoverished followers, they sent her off to Italy to be buried under a false name. It was later discovered who and where she was, and Juan Peron, having been re-elected and restored to power, arranged to have her returned in the early 1970s; he died before that could happen. His wife, who was his vice president and successor, did not want them--Eva and Juan--buried together, and gave the body to Eva's sister who had her buried in the Duarte Family crypt.

It is rumored that Evita's coffin has a glass cover over where her face is so that her family can view her embalmed remains.

Visiting the cemetary, we were told, is something that is odd to Porteños. It was strictly a tourist thing. Until ten years ago, nobody visited the cemetery. Now, with its popularity with tourists, the school kids take field trips there.
Posted by Dr. K at Friday, April 13, 2007

Ken,
Is the reason they pay their bills with cash is because checks have a tendancy to bounce - therefore businesses refuse to accept them?
Bill