Got a new camera--Blog functioning at full capacity

My nephew, John, and his novio, Tenaya, are visiting from Seattle. They arrived on Thursday morning and, well you know how it goes when you have out-of-country guests—not much time to update the blog. They are in Iguazu for two nigh 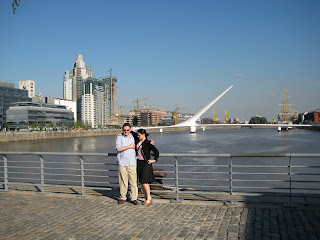 ts, so I’ll give you all an update. And . . .they brought me a new camera so the blog is back to full operation.

Thursday was our last tutoring session with Nieves. We had previously arranged to go out to sightseeing for our last class, and she said it was fine to bring John and Tenaya along.

We went to the Recoleta Cultural Center to see an exhibit on the Malvinas: Islands of the Memory . . . Public Images, Private Objects. It was very moving.

The war took place 25 years ago. My understanding is that the military dictatorship was growing increasingly unpopular and decided to express its territorial claim to these small islands off the southern coast. The islands are claimed by Great Brittan who refers to them as the Falklands. 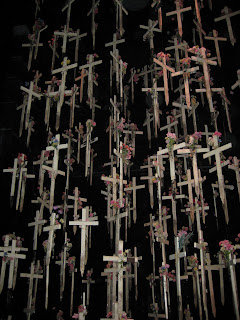 ly trained and equipped, arrived on these islands, located near the Antarctic Circle, in fall as weather was getting cold. This was the first time many of these young men even knew the islands existed. They were not dressed for the weather and the Argentine military command did an inadequate job of re-supply. 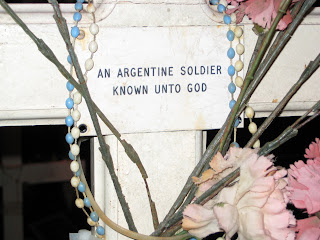 ” I often hear. I have also heard that the 11,000 prisoners were well cared for by the British. I have also been told that the veterans have better feelings about their adversaries than their own superiors over how the war was carried out. I don’t know. It is just what I have been told. Mostly, it is just a sad thing. I believe Argentina has a legitimate claim to these islands. All the maps here show them as Argentine territory.

Argentine dead were buried quickly and only much later repatriated or placed in marked graves. The original woode n crosses that marked their graves are displayed in a moving three-dimensional array fronted by insult covered silhouettes of Ronald Reagan and Margaret Thatcher.

From there, we walked to the University of Buenos Aires law school. John and Tenaya are both lawyers in Seattle. We had a good discussion with Nieves about law and political attitudes of young Argentines.


John keeps kosher. For his first night here in Buenos Aires, he had found a kosher parrilla in Barrio Once. The four of us went out for kosher asado. It was nothing remarkable, just more expensive. The most fascinating aspect of the evening was the young Orthodox Jewish family at the table next to us. A young man, his infant son, and totally beautiful wife. Tenaya pointed out to us that she was wearing a wig. Not only that, but it was actually a really good wig, and tasteful make-up, nice boots with stiletto heels and a skirt to the top of the boots. She was very fashionably and totally in keeping with Jewish conservative rules of dress.

Friday, while Helen studied, I took them out for a sightseeing walk. We walked to Plaza San Martin, then down Avenida Florida (always an adventure) to Plaza de Mayo and the Casa Rosada. We saw the famous balcony where Eva Perone (and later Madona) made her heartfelt speech announcing she would not seek the office of vice president. Oddly, the speech is not made from the main balcony of the Gov 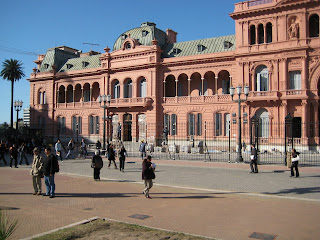 ernment House, but from a smaller balcony much closer to the ground where people could have almost touched her.

From there, we walked to Puerto Madero—the new and trendy barrio where once abandoned brick warehouses have been refurbished into trendy restaurants and the like. I have been several times, but I have never been on the 19th century Fragata Sarmiento, a floating museum that was once an ice breaker. This is an example of what I love about Argentina. A docent in naval uniform welcomed us aboard, told us we were welcome to explore the entire ship except where indicated, to take as many photos as we like, to go below, to go above, and be careful and watch our heads. That’s it. We were left alone to negotiate the slippery decks, the steep ladders, and the low passageways. There were no nervous attendants telling us not to touch things, there was no part of the ship that someone else decided was too dangerous for us to explore. If we wanted to go below and thought we were physically capable of going up and down a steep staircase, go for. Take responsibility, make up your own mind if you can do it, assume the risk, and do it. Just don’t complain if you get hurt—he did tell you to be careful. 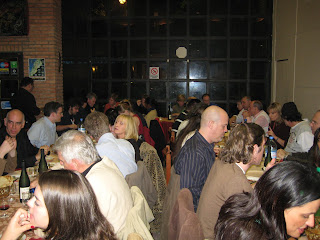 We headed back to the apartment in Recoleta and got ready for an expat gathering that night at Cheff Iousef restaurant in Palermo. The event was the monthly gathering of the BAExpats group. There were about 40 members and friends there that night to meet and have Lebanese food. I knew several: Pericles, Maya and Tom, Alan, Kiki, and I also met Igor who was very helpful some months back when I had computer trouble.

Buenos Aires has an active expatriot community that is 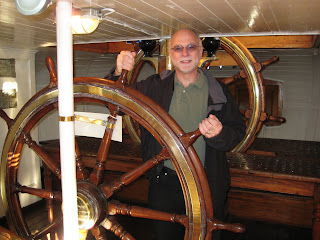 valuable for newcomers. These people have been here and made all the mistakes already. That didn’t stop me from making the same mistakes, however, because I didn’t know what mistakes I was going to make until after I had already made them. This group, however, let’s me know I am not alone. We also send news of ATM trouble, where to find peanut butter, and the best place to find sushi, a tutor, or how to start the residency process.

Saturday, Helen and I took John and Tenaya to La Boca. What is there to say about la Boca? Well, like it or not, it is the iconic image of old Buenos Aires. Its colorful buildings and dilapidated wharf are symbols of a storied past. Today, however, it is little more than a tourist stop—and not a very good one. I think we spent more time in the colectivo coming and going than we did in the barrio. I did get to see the Bombanera—the Boca Junior’s home football stadium.

We got our required “pose in front of the Caminito sign” photos, watched some street tango, browsed some souvenir shops, and headed back. John and Tenaya had a much better time in Coto—the grocery store. Gr 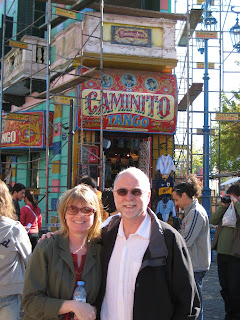 ocery stores are really fun. Seeing how the whole food thing works in another culture is really fascinating. While taking them through the store, I was lamenting that we didn’t have anyone to walk us through our first time: “Efectivo? Un pago? Disco Plus? Para enviar?” all these embarrassingly awkward moments could have been avoided.

This morning, we took them for a quick look at the Recoleta Cemetery before their remise picked them up for two nights at Falls Iguazu. Helen and I are planning a trip there, so John and Tenaya can return the favor and give us travel tips when they return Tuesday (for one night before they head out to Bariloche).
Posted by Dr. K at Sunday, April 29, 2007

SO glad there's a camera in your life again. Maybe keep it in your pocket instead of the belt holster. (And keep a hand on it while gawking at tall buildings.)

Fabulous post, Ken. I will certainly miss this when you're back in Frederick.

Maybe when y'all get back, you should change the name of the blog to "Esto año CON Primavera," and just keep blogging. (I can see it now: pictures of Jack, your new parilla, shots of you in your classroom, your fish pond -- your porteño friends would LOVE it!)

Kat in Oregon would read it.

The expat pathology indicates that there is a period of readjustment upon return the one's home country. I'll post about that process anyway.
Ken

Just a thing Ken,these young troops who came to the Falkland Islands,did know about them,they are told at school from a young age about them.Plus i live in the Falklands and so has my family for 4 generations,so mabey not a little different from your family from the US.Please look at both sides of the story,considerd that this was first time out of your country.Take a Trip to the Falklands one day and speak to the people there,and maybe you will hear a different story.