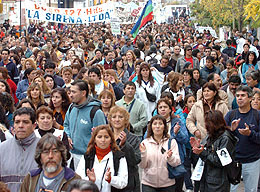 There was a big protest march today in Buenos Aires.

Teachers here in Argentina have been protesting all across the country for better wages and working conditions. The national minimum wage for teachers was just raised to $1040 per month (about US$335 or about US$4,000 a year). In the province of Neuquén, in Patagonia, teachers were protesting last Wednesday when a police officer fired a tear gas canister, point-blank, at the head of Carlos Fuentealba, a chemistry teacher, fracturing his skull. He died over the weekend.

Teachers in Buenos Aires, and from all around Argentina, gathered with 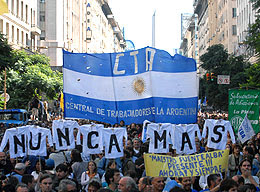 other social and human rights organizations beginning at 10:00 this morning. As a teacher myself, I went to march with them.

(Photos are from Clarín as you are now aware of my unfortunate camera incident. I did, however, take some video.)

Everyone gathered at the Obolisco and marched down Diagonal Norte to the Province House of Neuquén at the corner of Maipú where there were many passionate speeches about civil and human rights and state repression at the hands of the Federal Police. 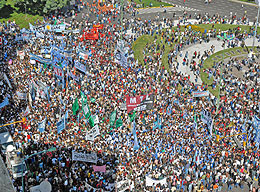 All along the route, I saw some interesting protest signs. Let me translate a few for you:
"We work--they exploit us.
We negotiate--nothing changes.
We protest--they kill us."
"Chalk will not write in blood."
"We are in the street because our friend was "assasinated."
The protest made its way to Plaza de Mayo, where all protests inevitably find their way.
Many other city services shut down in protest as well: public schools were closed, Buenos Aires University cancelled classes, many of the colectivo driver unions stopped running between 2 and 4. The hospitals refused to see all but emergency patients after 9:30 this morning.
I marched with a groups of teachers from Capital Federal. Everyone was calm. I encountered a group of Zona Norte protesters who were a bit agitated and scary, I got away from them. There were so many people, I had to leave the march and walk down parallel streets to get to the back of the speaking area to hear the speeches.
It will be interesting to read the papers tomorrow and see how much I missed. I was in the middle of a crowd and had a difficult time seeing the forest for the trees.
10-4-07 UPDATE: La Nacion says there were 30,000 people there yesterday. CNN also has a story. The Washington Post also covered the event.
Posted by Dr. K at Monday, April 09, 2007

Ok, Dawgg, tell me if I got his right: "Let's go, comrades, time to show a little more balls, so that the education of our community is not sold, but defended." (I took some liberties at guessing the meaning in spite of the actual words -- am I close?)

And according to MS Word, 99 said, "the chalk is not stained with blood." But I don't know... tell that to Fuentealba.

Chas, the slogan is more like a warning for it never to happen again... is more like "we´re not going to allow the chalk to be stained again with blood".
You got the song right.

Thanks, 99 [uttered in my best Maxwell Smart voice]! I'm amazed I got the song right. That chalk thing must be in one of those godforsaken pluperfect-subjunctive-conditional tenses that Ken is starting to struggle with.