Apparently, there are two routes for colectivo #37. The one we took got us nowhere near the MALBA this afternoon when the driver told us to get off because this was the last stop on his route.

We were right near the US Embassy. The flag was at half mast in respect to victims of the Virginia Tech tragedy. It is tragic news here. The story has been on the front page of both Clarín and La Nacion for the past two days. People here ask me about it and why things like that happen in the United States. I have to tell them I don’t know.

It’s not because I don’t think I have enough Spanish to explain. It is because I honestly don’t know. If I had a clue as to why this seems to be a USAmerican problem, I’d certainly try and explain it in my broken Spanish. But I just don’t know. It’s not that we have a lot of guns. Canada has a lot of guns. It’s not that we have a lot of violence. I read everyday here in the news that someone was shot because he resisted a robbery. But the rest of the world does not seem to think that killing dozens of people followed by suicide is an appropriate m 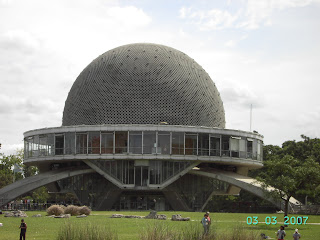 eans of self expression. If I had a clue, I would try my Castellano-best to explain. But I just don’t.

So we finally made our way to MALBA. We passed the planetarium. (I mention that simply because it gives me an excuse to use an old photograph, as my stolen camera is yet to be replaced.) There is a new exhibition of Brazilian artist Alfredo Volpi that was interesting. But we went to see the David Lachapelle photo and video exhibit. That stuff was intriguing. They also had a showing of some of his music videos. They were live-action realizations of his photos and a bit redundant. We watched Gwen Stefani and Christina Aguilera do just about the same schtick in two separate productions.

We made out way home—on foot and (eventually) by collectivo. I used some of the spices Suzie sent us to make chicken parmesan that turned out pretty well.
Posted by Dr. K at Wednesday, April 18, 2007

Labels: getting around, sightseeing